A free script to give back the "Controller" selection menu that was deleted from the Media panel in InDeisgn CC 2020. Essential for creating interactive PDFs with videos!

Adobe employs thousands of developers and managers, who make it a point of pride never to check with people outside their team before changing something. And so it is with InDesign and Acrobat.

If you embed a video into a PDF file, you create a "Rich Media Annotation" inside the PDF - and how that is played back is defined by the ISO 32000/EL3 standard. For videos it is done using a Flash (SWF) video player widget, with the on-screen controls in a second SWF "controller skin". That is it. No HTML5, no iFrames, just Flash. Adobe used to love Flash Player, so much that Adobe Acrobat and Reader had two copies each. Now Adobe hates Flash Player, and is randomly cutting it out of their Creative Cloud applications to pre-empt the official Flash End of Life at the end of 2020. So it was that with InDesign CC 2020, some bright spark saw that SWF files were somehow involved with PDFs and videos, and decided to Do Something About It. What they did was to remove the menus that let people choose which controlller skin to use. They didn't remove the videoPlayer SWF file, so interactive PDFs can still be created, but InDesign 2020 users cannot set the buttons without opening the PDF in Acrobat Pro and digging through properties panels.

InDesign CC 2019 on the left, with the controls for choosing the skin and setting its visibility; InDesign CC 2020 on the right with a borking great empty space. 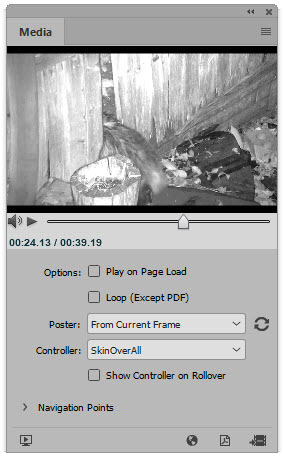 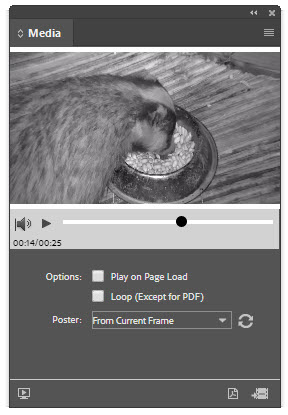 In their wisdom, Adobe left all the SWF controller skin SWF files in the InDesign 2020 installation, but you can't use them. GENUIS MOVE.

So, here is a simple free InDesign script that will give you back those choices in a popup dialog box. Just install the script (instructions below), select a "movie" frame in your INDD document by clicking it once, and double-click the ID_SetMovieController.jsx entry in the Scripts panel. It will show you what controller (if any) is currently assigned, and you can change it and set the Rollover option. It's a very basic script so you can only set one movie frame at a time, but it does what it needs to. Feel free to adapt and extend it, the script is completely free and open source (CC0).